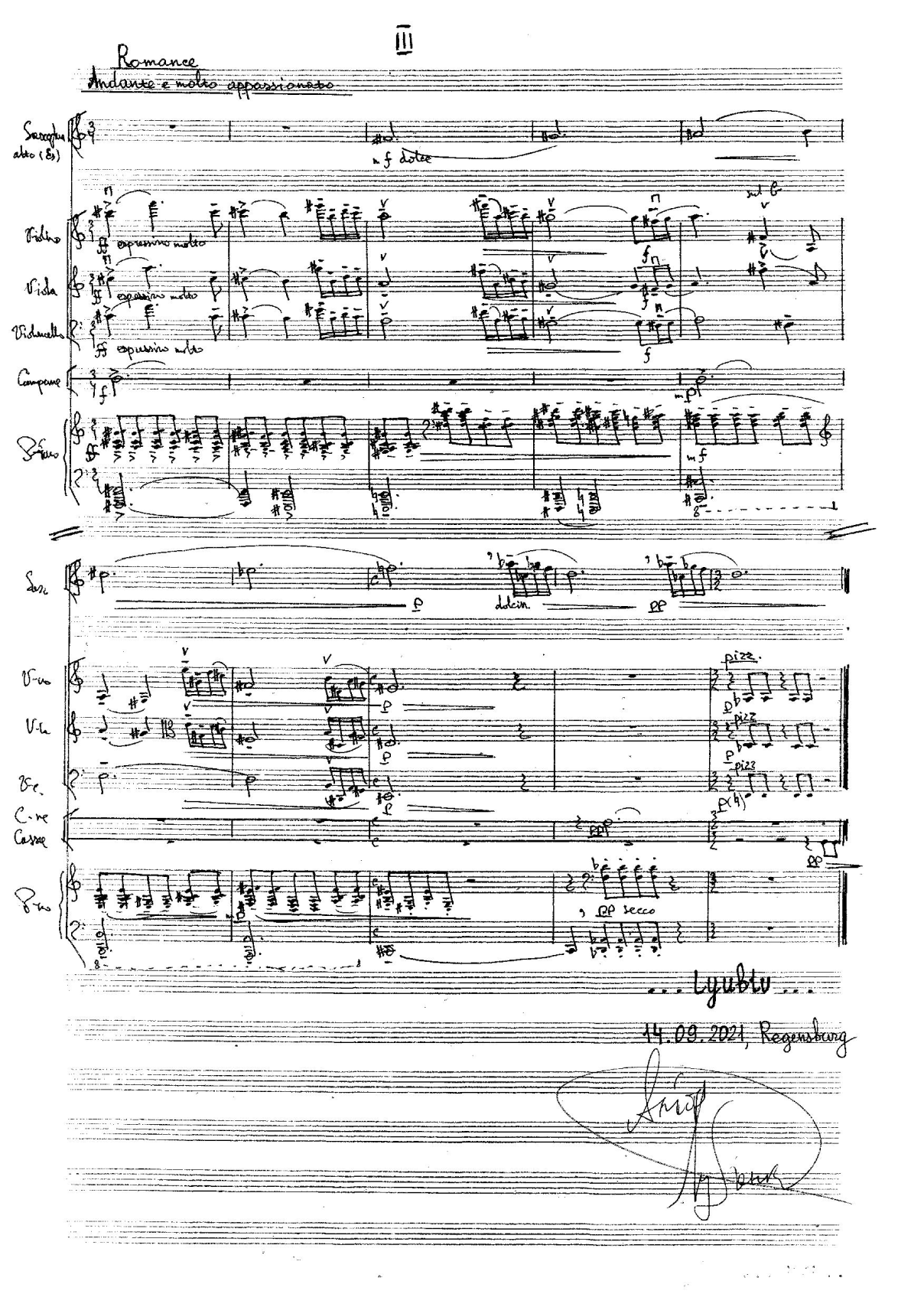 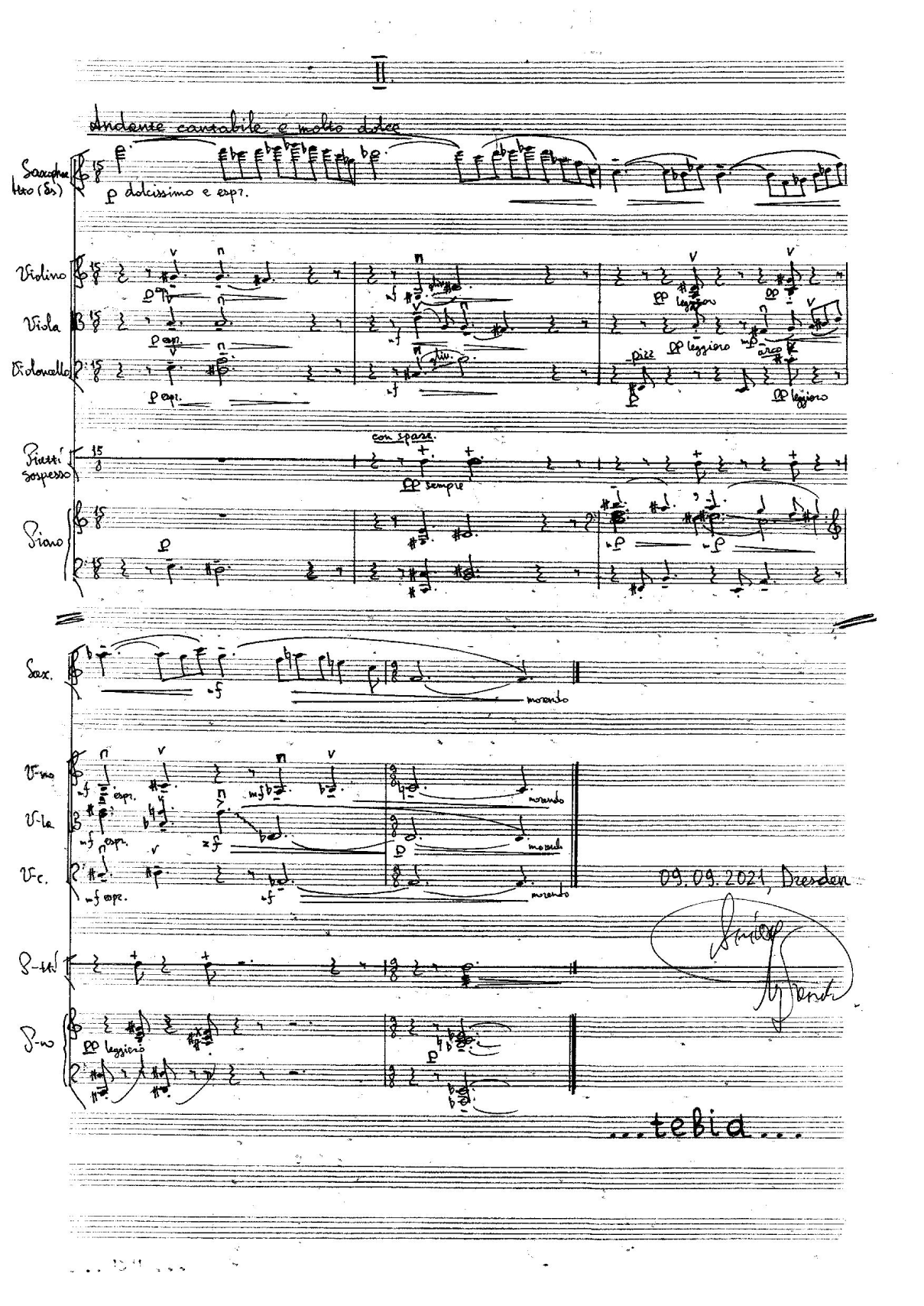 The Three Words is the shortest music triptych ever created.
Each of the three parts has a length of 30 seconds.
It will be the first classical music artwork NFT.

Until recently, we had no time to read long books. Now there is no more time to perceive long phrases.

But words still remain. And some of them will remain for a long time and will survive any time. “I love you...” These three words have been spoken by each of us at least once in our lives. And no matter how much time, space and our perception are compressed – these words will be pronounced as long as there is someone to pronounce them. They are the three whales on which the world stands...  I have written many symphonies and operas. I can also think in music by long sentences and complex phrases. But no matter what size I write – large-scale canvases, or smaller sketches the meaning of my works always comes down to just these three words: “ya tebia lyublu”.

The musical triptych piece The Three Words will be auctioned as a unique 1-of-1 NFT artwork referencing exclusively all three parts of the triptych. The NFT is of “phygital” nature, meaning the rights programmed into the token extend to the physical as well as to the digital realm.

On the digital side, the winner of the auction receives the world exclusive digital audio recording premiere of The Three Words with the ensemble of soloists of the Mariinsky Theatre Orchestra, St. Petersburg, Russia, conducted by the composer of the triptych, Anton Lubchenko himself, on 8 October 2021. The intimate experience of the composer conducting musicians of an orchestra well-known to him is a unique moment in time captured by the recordings and made possessable through NFT technology.

On the physical side, the purchaser receives ownership rights over the original handwritten score of the triptych. Furthermore, the purchaser has the option to attend Anton Lubchenko's next premiere and a private dinner with the artist as a guest of honor with accompaniment.

Physical II:
Option to attend Anton Lubchenko’s next premiere and a private dinner with the artist as a guest of honor with accompaniment.

Digital:
High-Quality audio recording with the ensemble of soloists of the Mariinsky Theatre Orchestra, St. Petersburg, Russia, conducted by the composer of the triptych, Anton Lubchenko himself, on 8 October 2021. Each part is 30 seconds long. The recording is stored permanently on the Arweave blockchain in a fully decentralized way.

The young composer and conductor Anton Lubchenko is valued by critics all over the world for his extraordinary musicality. His oeuvre contains of nine symphonies, four operas, several ballets, chamber music and numerous other works for orchestra, choirs and pianoforte.

Born in Soviet Union in 1985, he can best be described as the successor of Tchaikovsky, Prokofiev, Rachmaninov, Shostakovich. Anton Lubchenko develops the great musical tradition fusing the European tradition with those of the Russian, Ukrainian, Armenian and other cultures that once were part of the USSR.

A Ukrainian citizen, he was born in Russia, spent his young years in Ukraine where composed his first pieces of music. While still at school, he moved to St. Petersburg, Russia to continue his musical education. It was there that he started his career both as composer and conductor.

Anton Lubchenko graduated from the Rimsky-Korsakov Conservatory in St. Petersburg in 2008 in the composition class of a prominent composer from Armenia Aleksander Mnatsakanyan (a student of Dmitri Shostakovich) and in the piano class of Natalya Brovermann.

In 2010, at the age of 25 years, Anton Lubchenko became the youngest artistic director and chief conductor in the history of Russia, heading the State Academic Opera and Ballet Theater of the Republic of Buryatia in Ulan-Ude. In 2013 he was appointed General Director, Artistic Director and Chief Conductor of the newly built State Primorsky Opera and Ballet Theatre in Vladivostok. There he created a new symphony orchestra, choir, ballet and ensemble of opera singers. During his three-year tenure in Vladivostok, Anton Lubchenko staged 15 opera and ballet performances. Thanks to his initiative no less than 9 international festivals were held at the State Primorsky Theatre and he was invited, together with his orchestra and ensemble, to perform in the Great Hall of the Moscow Conservatory, the Mariinsky Theatre in St. Petersburg, and the Bruckner Haus in Linz, Austria.

From 2017 to September 2020 Anton Lubchenko held the position of Artistic Director and Chief Conductor of the Sochi Symphony Orchestra. And later was cooperating as an Artistic Director with Tsaritsynskaya Opera House in Volgograd (former Stalingrad).

He is a prizewinner of many international competitions including the renowned Silver National Prize "Pure Sound" for the best recording of Russian music with Prokofiev's opera The Story of a Real Man, op. 117. Since 2015, Anton Lubchenko is composer in residence for the annual ball at Dresden’s Semperoper.He was given the honorary title of "The Muses of St. Petersburg" and won the State Award of the Governor of St. Petersburg as best composer 2019.

His new opera WIR based on the first dystopia novel WE by Evgeniy Zamyatin had its premiere in Regensburg, Germany. The staging was a great success both with audience and media. The novel by the Soviet author Evgeniy Zamyatin, written in 1920, initially fell victim to censorship in his homeland. Like Aldous Huxley's BRAVE NEW WORLD or George Orwell's 1984, Zamyatin's dystopian vision of the future is now considered a classic of science fiction literature. De-individualization, oppression, surveillance and stagnation of life - these are the characteristics of the world depicted  in WIR (WE). The individual counts for nothing here, only the “we” counts.In his musical farce WIR, Anton Lubchenko emphasizes the struggle for humanity in a totalitarian structure that has degenerated into the grotesque. Here he plays with different styles, which he breaks again and again. In this way he creates an ironic musical context to the literary dystopia.

His string sextet op.106 SOUVENIR DE LEONARDO accompanied the exhibition "Mona Lisa, A smile for Europe" in the Red City Hall in Berlin. The work was written especially for this exhibition on the occasion of the elections to the European Parliament.

His very own 9th Symphony (LINZER SYMPHONIE) had its world premiere in Austria at the Brucknerhaus in Linz under the baton of Vladimir Fedoseyev. Together with Mozart's Linzer Symphony it was later recorded and released in the album Two Linzer Symphonies.

His opera DOCTOR ZHIVAGO, based on the world-famous novel by Boris Pasternak, had its world premiere under the composer's baton at the Theater Regensburg, Germany. Later, that year, the opera was also performed at the State Primorsky Theatre, Vladivostok. During the 2015/16 season, following an invitation of Valery Gergiev, he performed several operas (Iolanta, Mazeppa, May Night, The Tale of Tsar Saltan, and The Story of a Real Man) as a guest conductor for the Mariinsky Theatre, St. Petersburg. He also recorded the soundtrack he had written for the film THREE DAYS BEFORE SPRING with the Mariinsky Symphony Orchestra.

At the National Centre of Performing Arts in Beijing, he conducted two programs of Russian symphonic music including works of Prokofiev, Tchaikovsky, Rachmaninov, Glinka and the world premiere of his own symphonic poem ANNA KARENINA with Beijing Symphony Orchestra.

At the Opéra National de Lorraine, Nancy, he conducted the world premiere of symphonic fragments of Sergey Prokofiev's last opera The Story of a Real Man, originally written in 1948 and reconstructed by Anton Lubchenko. He performed his own Symphony No. 7 (Orthodox Russia) for the first time in St. Petersburg. This performance inaugurated the celebrations of the 1150th anniversary of the origin of Russian Statehood.

His cantata, THE VOICE, based on words by Mikhail Lomonosov, has been awarded 1st prize, as well as the Special Prize of the Moscow Conservatory at the "An Ode for Lomonosov" Competition in Moscow 2011. The cantata was subsequently performed in the presence of the Government of the Russian Federation at a concert devoted to Lomonosov's 300th anniversary at the Moscow State University and at Moscow's International House of Music.

Anton Lubchenko conducted a concert-requiem at the fortress of Brest, Belarus. The program included works by Prokofiev, Shostakovich and his own cantata. This project was sponsored by the CIS Interstate Fund for Humanitarian Cooperation and the Federal Agency for the Commonwealth of Independent States "Rossotrudnichestvo".

He premiered and conducted his ballet IN COLORS in Toronto with the National Ballet of Canada.

His opera THE SON OF MAN in memory of the victims of the Beslan tragedy, was premiered in Vladikavkaz, Russia.

A performance of his Liturgy of St. John Chrysostom at the opening of the 12th Easter Festival in 2003 was the beginning of the, at the time only 18-year-old, composer's career.